Harper had pledged today on Twitter that Canadians could expect eight new faces, including four women, in cabinet.

The changes were announced as the new cabinet arrived at the governor general's residence in Ottawa: 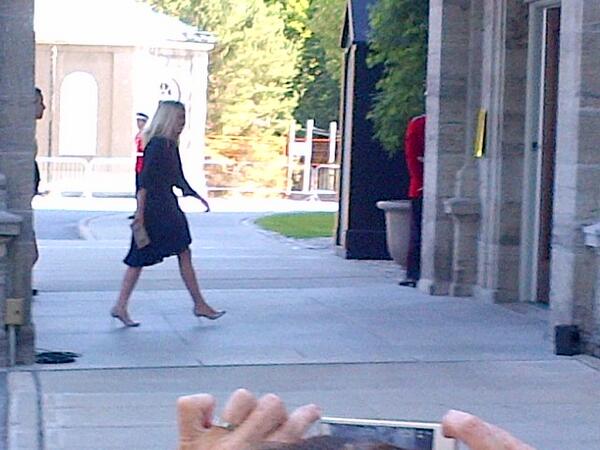 The prime minister is solely responsible for determining his or her cabinet and determining how to achieve geographic, linguistic, gender, and ethnic balance. Each province is ideally represented, although caucus membership and election results can force alternative arrangements. Peter Penashue's resignation and by-election defeat left the Conservatives without any MPs in Newfoundland and Labrador.

The prime minister is solely responsible for determining his or her cabinet and determining how to achieve geographic, linguistic, gender, and ethnic balance. Each province is ideally represented, although caucus membership and election results can force alternative arrangements. Peter Penashue's resignation and by-election defeat left the Conservatives without any MPs in Newfoundland and Labrador.

The original federal departments at the time of Confederation in 1867: Finance, Agriculture, Penitentiary Service (now part of Public Safety), the Post Office (Canada Post is now part of the transport minister’s portfolio), Public Works, the Privy Council Office, and the Secretary of State.

Officially speaking, the cabinet is a committee of the Queen's Privy Council for Canada.From House of Commons Procedure and Practice: "Originally, the Privy Council was a more or less permanent executive body of nobles chosen by the Sovereign as counsellors. The Council was separate from the legislative body, or Parliament, of which the Sovereign was a constituent part. When the Council became too large for the practical purpose of consultation, the Sovereign selected from among its members his or her most trusted and intimate counsellors. The practice of forming from the larger group of privy councillors a small, specialized committee to advise the Crown has continued to this day."

Responsible government means that members of the executive must be accountable to the House of Commons. By custom, ministers are MPs (with the exception of the government leader in Senate). Effectively, the party controlling the Commons controls the cabinet. Michael Fortier was named public works minister for Harper’s cabinet in 2006 despite not being an MP or a Senator. Fortier was appointed to the Senate and promised to run for a Commons seat, which he did unsuccessfully in 2008. Another example was Gen. Andrew McNaughton, who was wartime defence minister in 1944-45 but resigned after two unsuccessful election campaigns.

Here's some background on cabinet committees, courtesy of Library and Archives Canada: “A reorganization took place in 1964 and most ad hoc committees were replaced by nine standing Cabinet committees each with their own secretariat. In 1968, Prime Minister Trudeau converted the Privy Council Office into a more businesslike operation by reducing the number of Cabinet committees and providing for more regular meetings. "He delegated certain powers from the full Cabinet to committees themselves. All Ministers, whether committee members or not, received committee documents and were granted permission to have an item dealt with by committee discussed in the full Cabinet. "Under a reorganization of 1968, four coordinating committees and five specialized committees were established and three main divisions were created and the Privy Council Office received program policy proposals in the form of submissions to Cabinet. When a decision was made, it was recorded and when it was approved by Cabinet, it was forwarded to the responsible department.

Priorities and Planning is considered the key committee:“In 1979, under Prime Minister Clark, an ‘Inner Cabinet’ was set up with final decision making authority and the role of the full Cabinet was limited to discussion and coordination. Clark also set up the Policy Expenditure Management System which previewed expenditure priorities and reallocated resources within departments.“In 1980, under Prime Minister Trudeau, the Priorities and Planning Committee, which included the chair of all Cabinet committees, and therefore dealt with a wide range of issues, assumed the responsibility for the Inner Cabinet and had authority to take final decisions in the same way as the Cabinet itself.”

Harper: new government program to be outlined this fall in a Speech from the Throne. (This means Parliament will have to be prorogued)