The text of the government motion has been released. Canada will contribute to sir strikes for six months but not ground troops will be deployed. The targets are ISIL and ISIL-allied terrorists.

Harper spoke under the portion of Routine Proceedings known as "Statements by Ministers." Here is the relevant Standing Order:

factual announcement or statement of government policy. A Member from each of the parties in opposition to the government may comment briefly thereon. The time for such proceedings shall be limited as the Speaker deems fit.

The House of Commons is expected to the debate the motion and vote Monday.

Harper: "Today, we are bringing forward a motion asking this House to confirm its confidencefor a Government decision to join our allies and partners: The United States, the United Kingdom, France, Australia, Denmark, Belgium, the Netherlands, Jordan, Saudi Arabia, Bahrain, The United Arab Emirates, And likely others, in launching air strikes against ISIL."

Harper: "We will strike ISIL where – and only where – Canada has the clear support of the government of that country. At present, this is only true in Iraq. If it were to become the case in Syria, then we would participate in air strikes against ISIL in that country also."

Harper: let me assure Canadians that the Government is seized with the necessity of avoiding a prolonged 'quagmire' in this part of the world. 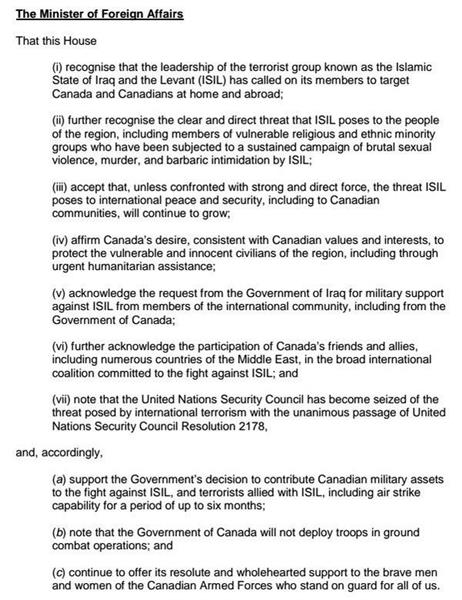 Harper: "If Canada wants to keep its voice in the world, and we should since so many of our challenges are global, being a free rider means you are not taken seriously."

Mulcair says Harper has not outlined a broad strategic outline for the mission and has not answered basic questions.

Mulcair: Canadians have their doubts. Conservatives are telling us the mission will be expanded. The prime minister is leaving open the question of engaging in Syria.

Next was Liberal Leader Justin Trudeau, who accused Harper of not being "upfront" about the government's plans.

Trudeau: the Liberals will not support the government motion.

Powered by Platform for Live Reporting, Events, and Social Engagement
CPAC uses cookies to provide you with the best possible browsing experience on our website, and to show you relevant online ads through our advertising partners. By continuing to use our site, you agree to our use of cookies. Visit our Privacy Policy page to learn more or click “I Disagree” to opt-out of advertising cookies.
X